Home » All About Runes » RUNES: HISTORY AND ITS DEVELOPMENT

RUNES: HISTORY AND ITS DEVELOPMENT 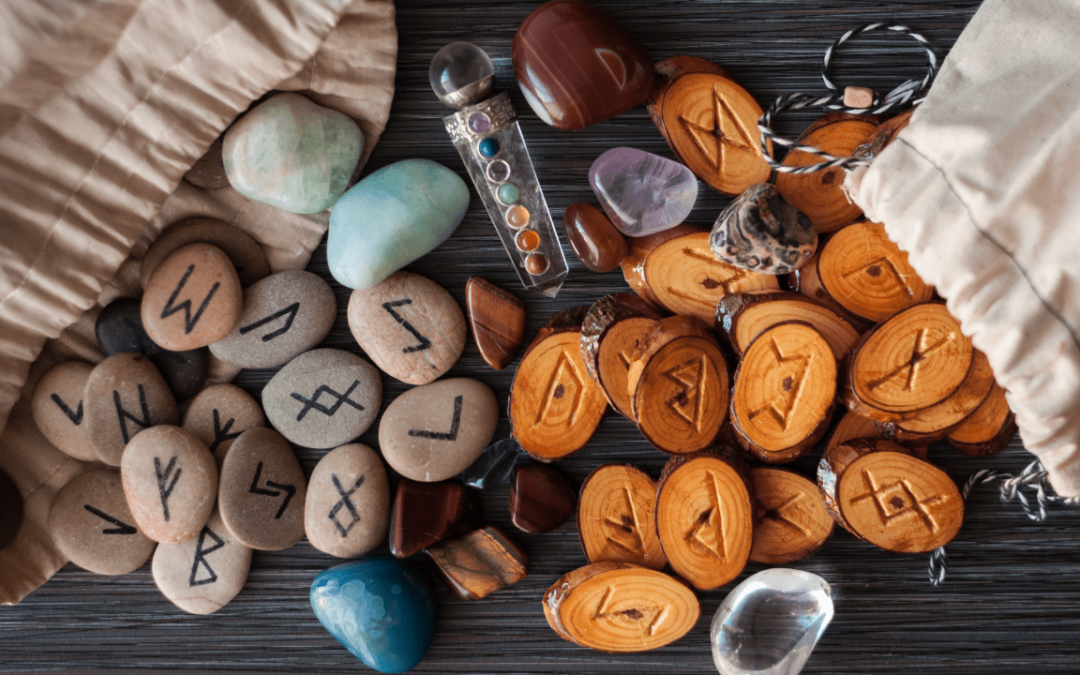 Many people have heard the word runes; and yet few actually know what these are or even what their uses are. What are runes? There is a short and a long answer to that question. In short; runes are the letters that are contained in a series of related alphabets that all form what is known as a runic language. There are those that suggest that as well as being used as a source of communication; there is another use for runes in the form of magic.

Runes have a lot of other uses.

They’re used for writing, as well as to take on many different purposes in the magical world. It’s imperative to note that the fortune of a person cannot be told by runes; but they are a good way to help a person see the path they are currently traveling. Knowing this, you will be able to travel the path and proceed in the direction that you want to take. You’ll be able to make massive adjustments or stay the course.

But really, what are runes other than a language and a tool to be used for magic? Where did they come from?

Runes date back to around 150 A.D. The Germanic peoples who lived from the 1st and 2nd centuries A.D. used runes for a variety of purposes; including linguistic.

Who were the Germanic peoples?

‘Germanic’ is a general term that has seen frequent use by scholars and scribes since times of antiquity to describe a multitude of tribal cultures. Specifically; Roman scribes used the term ‘Germanic’ to refer to the tribes that inhabited the regions of Lower, Upper and Greater Germania—these regions correspond roughly to modern-day Luxembourg; Alsace, the Netherlands, Belgium, the North of France, and; as its name suggests, Germany.

These tribes were viewed by these same Roman historians as being physically hardier; but far less civilized and couth than themselves. Also importantly; Germanic groups were considered distinct from the Celtic Gauls, who were considered to be less advanced than the Romans, but still a step above the Germanic peoples. The use of runes is believed to have been spread by cultural contact between Germanic people, who often traveled widely abroad as mercenaries in the Roman army and throughout the Italian peninsula during the 1st century BC to the 5th century AD.

Historians speculate that the popular use of runes may have spread during the late Common Germanic stage. While it might be tempting to regard the runes carved by early peoples to be simple creations depicting a crude language; we now know that even the earliest runes, while lacking clear phonetic and linguistic complexity; reveal a rich diaspora of dialects. Indeed; the earliest runes made by the Germanic people incorporate a dazzling tapestry of dialects that would continue to diversify in later centuries, such as North Germanic, West Germanic, and Eastern Germanic.

There were a number of different systems developed, but they were replaced around 700 A.D. with the Latin alphabet we’re currently using today

The term ‘runes’ is used to distinguish these early symbols from the Latin and Greek letters we commonly use today. ‘Rune’ has its origins in the Germanic root run, or the Gothic runa. To scholars, the meaning of runa is at once symbolic and tantalizing, translating roughly to “secret;” or “whisper” in many early Germanic dialects. For instance, in Welsh and Old English, the word rhin or rūn has connotations of “mystery” and “secret” and; in some cases, “secret writing”.

In Old Irish Gaelic, the word rún means “secret” or “secret intention;” and if one were to go even further back in time, the modern English word “rune” can be seen to have been loaned from the Proto-Germanic word *rūnō, meaning “secret letter” or “secret literature.” From its earliest inception; the very idea of runes was deeply steeped in a sense of mystery and wonder. So it should come as no surprise that the early peoples would associate runes with intrigue, mysticism; and a kind of secret wisdom available only to those who could decipher them.

The legend that surrounds these runes begins with the Norse God Odin. It is said that the runes were a gift from the Gods to Odin after a wound inflicted upon him by his own hand by a spear. He hung himself from the World Tree, Yggdrasil; for nine days in order to learn the secret language of the runes. This experience came to be popularly known as Odin’s ordeal to learn the secrets of the runes. It is said Odin himself described his experience in great detail in his poem. He penned the epic poem, Havamal, which describes in great detail Odin’s personal perspective of that horrible experience.

While the legend of Odin’s suffering and ordeal does a great deal to elaborate on the mystical significance and power that the ancient Scandinavians attributed to runes; it does not really explain the real-world origins of runes. This fact still eludes modern scholars, although several prominent theories have been formulated. Historians do seem to have formed a relative consensus that runes probably had some historical basis on the Old Italic alphabets.

The term ‘Old Italic’ refers to one of several alphabet systems that saw widespread use in the Italian Peninsula during ancient times, several hundred years before the rise of the Germanic runic alphabet. Numerous Old Italic alphabet systems existed, each used by a different indigenous group, and each representing their specific Indo-European language. For instance, the Sabellians, Oscan, Umbrian, Celtic, Venetic; and Messapic peoples used a form of Old Italic, whereas the Faliscan, North Picene, and other peoples inhabiting the Oscan and Umbrian regions used an alphabet form more closely derived from the Etruscan variant of Old Italic. However, just which of the Old Italic alphabets gave birth to Germanic runes is a question that is still hotly debated by linguistic scholars.

An interesting characteristic of Germanic runes is that its characters contain absolutely no horizontal strokes: only vertical and diagonal strokes are used in rendering each symbol of this alphabet. There is a practical historical basis for this. Since wood or stone were the favored materials upon which to carve runes; vertical and diagonal strokes produced more legible and aesthetically pleasing symbols. Horizontal strokes would go along the grain; and would thus produce runes that were less readable, and threatened to weaken or even split the wood.

Possibly the most interesting realization that historians have made about runes is that; in its earliest forms, they were not, in fact, used as a writing system at all. To date; the earliest examples of runic inscriptions found on artifacts sometimes bore simple messages, such as the name of the craftsman who made the artifact; or who it belonged to.

However, there are other longer sequences of runes that continue to baffle linguistic theorists and confound attempts to decipher their meaning. It has been theorized that these sequences hint that runes; in its earliest form, were not widely used, or perhaps even used at all, for recording messages; but instead; as magical signs.

Historians have reasoned that the earliest runes were tools that were used with one purpose in mind. They were solely used for divination and for opening up psychic awareness.  It stands to reason that, with the fact that the various meanings of the word rune all translate to meanings associated with “secret,” “mystery,” and “hidden things”; runes were originally imbued with a distinctly esoteric value. Their appearance was rare, and possibly highly valued, because they were restricted to a particular elite; perhaps shaman, wise men, or other mystics who learned or were taught how to carve and read them.

Runes are a set of twenty-four stones or tiles containing primitive carvings of letters or characters. These runes can be implemented to gain spiritual insight and messages. They provide another alternative for conversing with the universe and your higher self.

As we mentioned earlier, the word itself, rune; translates to something hidden or secret, and there is plenty of evidence that dates from the Germanic Iron Age and Roman period to show that they were originally used for magical purposes. They appear on amulets in order to act as charms from these time periods. There is a sixth-century warning on a monument from the Master of the Runes that he hid powerful runes inside the monument; and anyone who dared to damage the monument would die.

This monument is the Stentoften Runestone, found in the province of Blekinge, Sweden; and the curse it bears has been an important key for modern historians in their attempts to understand the significance of runes to the early Germanic people. Perhaps the fact that the Stentoften Runestone is still standing—no less in the same spot where it was first erected hundreds upon hundreds of years ago—is a testament to the ominous power and magic behind the runes that bear the curse of the Master of Runes!

Even as late as the medieval period, runes were associated with mystic potency and magical significance. A prime example of this is the Franks Casket, also known as the Auzon Casket; an artifact which has generated considerable interest in the scholarly world. Made from whale’s bone, the casket is decorated with impeccably intricate illustrations and runes. What makes the Franks Casket particularly striking to the academic community is that it is decorated with imagery, symbolism, and runic alphabets from a variety of contrasting cultures: Germanic, Roman; and even Christian?  The complexity of the rune languages and illustrations imply that the casket was a prized creation indeed, possibly meant as a tribute gifted to a king or other great leader.

For centuries, runes were only used and known by an elite few and only began to become popular around the 1980s. During that time, an entire series of books, sets, and cards were created in order to reveal how they could be utilized for magical and divinatory purposes. Many people began their psychic path using runes as their inspiration.

For divinatory exploits, they hold a lot in similarity to the I-Ching. They are usually stored in a bag just like the I-Ching. When required, they are drawn out one after the other and cast on a flat surface, where they can be interpreted by an expert or a rune reader.