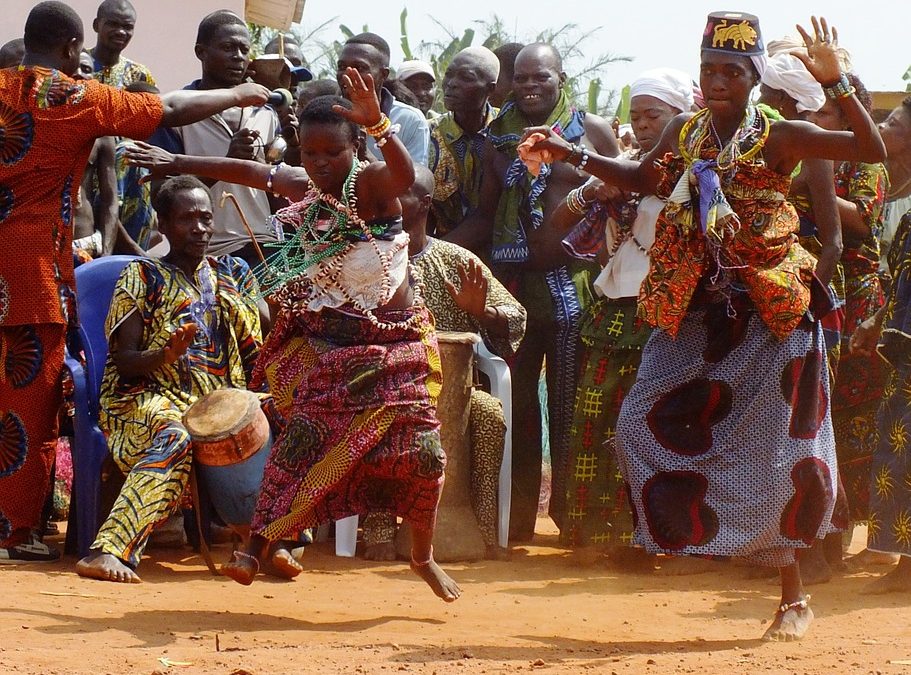 The Haitian Voodoo can be derived from the religious beliefs of Haiti. In an article from The Guardian, they have stated that over 30% are Protestants and Catholics, but still 100% Voodoo. In their country, the voodoo contains a hint of Catholicism, Christianity, as well as other African religions as well as the folk magic. Just like any other religion, the Haitian Voodoo is transferred through the word of mouth.

However, this “religion” has no scriptures as the basis. Houngas, male priests, and manbo, female priests, are easily available to perform rites and rituals and also to provide counsel. But believe us that this voodoo is not really the same in every location, this holds especially true for the Haitian Voodoo. Most people believe that this visible world is just entwined with a spiritual world, they insist that there is a single entity who is all-powerful and most people pray to these ancestors or spirits.

In the 1700s, the Voodoo came into the Haiti and was branded as the Haitian Voodoo. This happened because the slaves from Africa were brought to the country to work to the cane fields. Because of the heavy influences of the Voodoo practitioners, these slaves have revolted. They have killed their masters and took over the land as their own. The owners are now afraid of this Voodoo, because of this, they forbade anyone to practice this under the penalty of death. Other than this, the owners have made up scary stories such as practices of stabbing pins into the dolls and making zombies.

Up to this day, the practitioners are still facing discrimination. These Haitian Voodoo practitioners are lynching especially if they come across a fundamentalist religious group. A reason for this cause is that this voodoo practice is against the social norms. For example, this religion treats everyone equally and pleases every member of the LGBTQ community. But, Haiti is such a poor country that they do not have enough access to modern medicine. 60 years old is their average life span and, sadly, the child mortality is very high. You can see death of a family member or a friend every day.

In Haiti, they believe that your soul will enter the spirit world right after your day. However, it will still stay close to your body for  7 to 9 days. Voodoo practitioners in Haiti state that this is a difficult time for the soul because a practitioner with a grudge or an evil practitioner could steal the soul and prevent it from having eternal peace.

The “Nine Night Ritual” is performed by the Manbo or the Houngan after a week has passed. This practice holds true for the Haitian Voodoo practitioners. In this ritual, the soul is freed from its ties to the body and is allowed to go to a dark-watered place, it will stay there for a year and a day. After this time, another priest will perform the “Rite of Reclamation” in which the soul is transferred to a clay jar we call a govi.

After the said ritual, the priest destroys the govi in a ritualized manner. This ritual is believed to deliver the soul of the dead to the community of its ancestor. The beloved spirit will now be transferred to the body of a friend or a family member. The practitioners pointed out that LGBTQ people are very receptive to souls, this is one of the reasons why religion likes the community. Based on their experience, the spirit will reincarnate around 16 times and after which it will enter the spirit world for good.

In the Haitian Voodoo, you can’t destroy a body after its death. Most people in Haiti dies in their home. The dead are surrounded by their loved ones who starts the ritual wailing when the death commences. The family member responsible for making the arrangement such as handling the body and the funeral rites performance is the eldest member of the family. Another member of the family is tasked to give the last bath. This bath represents respect and affection. There is a problem with the disposal of the body, mainly because the effect of the body affects the spirit. Cremation is not really allowed because, in Haiti, you can’t destroy the body. Most families prefer to erect a mausoleum to have as a resting place. However, this would cause a ton so most family would just rent public mausoleums as resting sites.

After the first year is over, or when the family can’t pay the mausoleum rent anymore, the body will now be burned. Some families opt to abandon the body in a secret spot and pray that there is no harm to come in the body of their beloved.

The Development of Haitian Voodoo Religion

We can describe the Voodoo religion as vibrant and rich. It intertwines a lot of systems of belief. In the Haitian Voodoo religion, they have a lot of rituals that center on dying and death. This would ensure that the spirit would go on the place of the ancestors and look after their loved ones on earth. It is a tradition that extended Haitian family member form groups to surround a central courtyard. This structure is called the “lakou.” The term means an extended family group.

The lakou is rooted on the Haiti’s plantation heritage. Because Haiti emerged from slavery, the country has adopted this practice to fight against the enemy. Lakou now became the arm against opposition to any action that plans to return the plantation order.

Another great factor that greatly contributes to the lakou development is the Voodoo. The Voodoo in Haiti may be well rooted from the neglect of the Catholic Church for 56 years. This happened after the country has achieved the independence in 1805. The West African traditions that is the root of the Voodoo religion began to flourish due to this activity. Because there is no Catholic Church in the early 1800s, West African traditions started to emerged. The tradition includes family compounds. This compound is closely linked with the voodoo practice. The voodoo practice became the foundation of the Lakou system.

The intersection among the spirituality, land, and the extended family is called the lakou system. Other than that, the system is believed to be a liberty symbol even though there is slavery and oppression. It is very impossible for family to maintain their family tombs and serve as a spiritual link to their ancestors. In the same structure, the family cemetery is very important. These places will serve as a constant reminder of family origins as well as the lakou system. This reminds the family members the land and the community it has started from. The Haitian Voodoo strictly dwells on the the ancestor worship, with this, the Voodoo is not only strictly religion but a way of life. In the beginning, the ritual using Voodoo was conducted inside the lakou. An entire group will recite their genealogy of spirits as well as lakou ancestors.