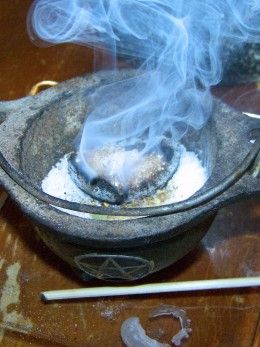 The tradition of Wicca is drawn from the Old Traditions of Witchcraft; however, though Wicca and Witchcraft are similar in so many ways, they are NOT the same. A person can be a witch without practicing Wiccan, just as one can be a Christian, and NOT a Baptist. Witchcraft has many forms, while Wicca itself is recognized as a religion. In this regard, we should look at Wiccan as a modern religion, which is based on the ancient tradition of Witchcraft.

Contrary to what most people thought, Wicca doesn’t promote evil practices. Wiccans live by their code “as long as you are not harming anyone, do as you wish.”

Wicca is about feeling the warmth of the sunrise and the calmness of the sunset. The gentle caress of the summer breeze on your skin, a meadow illuminated by the light of the sun, the glowing full moon, the fall of colorful leaves in autumn and the softness of snow. To become a Wiccan witch is to become a giver, a seeker, a healer, a teacher, and a protector of all things. It is about walking the path of light, honor and integrity.

The Wiccan religion’s belief system is based on pre-Christian’s traditions that originated in Scotland, Ireland and Wales.

Wiccan religion traces its belief system all the way back to the Paleolithic era, where people worshipped Hunter gods and Fertility goddesses. Thus, Witchcraft, where Wicca traces its history, is one of the oldest belief systems in the world, predating Christianity for around 28,000 years.

The misinformation unfortunately turned into fear of superstition, resulting to harassments and persecutions of people found or suspected to practicing Witchcraft.

Witchcraft, as with most traditions, is a spiritual system. It preaches acceptance of responsibility of actions and deeds. If one causes harm to others, they should blame no one but himself, and should face the consequences. No ifs and buts.

Witchcraft acknowledges the cycle of nature, the phases of the moon and worship of the divine. It allows witches to work with the deities to live in harmony and balance of all things, NOT in supplication with them.

What Witchcraft is Not

Witchcraft is NOT a cult. They don’t convince people to follow their path and see them as leaders by proclaiming to be the spokespersons for the divine.

Witchcraft is NOT about worshiping Satan or consorting demons. People should know that Satan is a creation of Christianity. They choose NOT to do wrong out of fear of eternal damnation, but because it’s the right thing to do.

Witchcraft is NOT about harnessing the powers of nature and casting spells or hex on others.