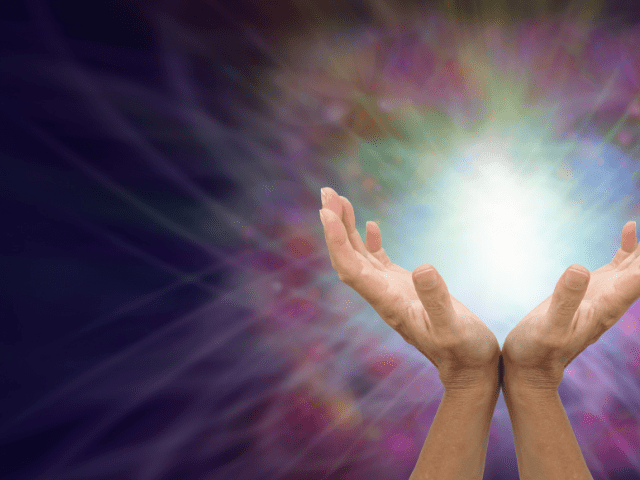 At the core of Wiccan belief, there is a fundamental idea that within; and among the world (and the universe), divine energy exists. This divine energy is commonly depicted in the form of the Goddess and the God. The definition of these figures varies among individuals, but they are essentially two dualistic figures; who can manifest themselves in one or many forms. The Goddess and the God can also be interpreted as symbols for various aspects of the world. They are part of everything; not above us, but within us and around us.

The God and the Goddess may be seen as equal but opposite entities or figures; often representing masculine and feminine energies. While they are traditionally seen as male and female, that doesn’t necessarily mean that they are sex or gender exclusive; it simply means that they are two parts of the same whole with opposite energies.

The relationship between the God and Goddess is usually that of divine lovers. They can be seen as the mother and father of life; as well as the dually opposite energies that exist in everyone and everything. The most important thing to remember is that they are completely equal; one does not rule over the other and both work together harmoniously.

The concept of dualism isn’t exclusive to the Wiccan religion. Many other religion and spiritual practices incorporate some type of dualism (mainly, the concept of “equal but opposite figures”) into their belief systems. For example, Yin and Yang from Taoism is a very similar idea of two divine figures representing opposite qualities (for example, dark and light).

In traditional beliefs, The God and the Goddess are not a situation of “good versus evil”. Wicca ties in with the cycles of nature, and nature is far from black and white. There are aspects of both dark and light within the Goddess and the God; just as each of us have a darker and lighter side. Neither is better or worse than the other; both sides have different meanings and messages to learn from. This goes for the idea of life and death as well. In Wicca, death is not seen as something terrible and final. With death comes life and rebirth, just as leaves fall and grow again during the cycles of the seasons.

There are several different ways you can honor; and worship Wiccan deities depending on your personal choices and methods of practice. Many Wiccans simply regard the God; and Goddess as dualistic forms of divine energy that lives all around us, and that’s about it. Others have a more specific type of worship. For example, the God and Goddess can have many forms, including manifestations of deities from various cultures. In this case, the Wiccan would call upon that specific deity depending on what kind of spell or ritual they are performing.

In Wicca, worshipping the Divine is NOT the act of bending down in submission; or expecting the gods to take full control and make all the decisions. Instead, Wiccans embrace the Divine, because the Divine is a part of what’s all around us; and within us, not better or more authoritative than us. Wiccans call upon deities to help advise them, guide them; and assist them in making decisions and actions on their own.

If you’re still wondering how you should worship the deities, or which specific deities you should worship; the choice is up to you. Here are a few ways that deities can be worshiped or acknowledged during spells and rituals:

Singing, chanting or speaking. Many Wiccans use vocal chants or sing songs to get in touch with magical energies and invoke the Divine. Physically speaking out during rituals is a great way to feel more engaged; and get into the “zone” of magical work. Rhymes and chants are usually easy to remember and you can get as creative or simple as you like. Of course, not everyone likes to speak and there are plenty of other ways you can physically call on deities. Doing actions such as meditation, visualization or symbolic movements (such as lighting candles or making hand gestures) are other methods you can use.

Lighting deity-specific candles. You can have a place for the God and Goddess on your altar by simply providing them a pair of different colored candles. The colors can be whatever you feel strongest for both figures. You can also use a green, silver or white candle for the Goddess (the moon and the earth) and a red; gold or yellow candle for the God (the sun). Some believe that the placement of the candles matter on an altar; but you can arrange things according to what works for you (we’ll talk more about altar arrangement in Chapter 5).

Divine symbolic tools. There are several different types of tools that can be used during spells; and rituals that can help bring you closer to the forces of nature and the Divine. A cup or chalice is often used to represent the Goddess on an altar as they symbolize her womb where the origin of life occurs. For the God, a censor, wand or athame reflects a masculine or phallic presence.

Mother: An ancient mother goddess and the bringer of life. She is a symbol of fertility, sexuality, power, and life. She is seen as the full moon; ripe and swollen with stability and magical energy. You can call upon the Mother for fertility spells; or spells that require a lot of power (for inner strength and fulfillment). If you’re at a time in your life when you need strength; and fulfilment or you’d like to get your bearings and discover your inner power, look to the Mother Goddess. The Ancient Greek Goddess Selene is a motherly figure connected with the Mother Goddess.

Maiden: The young maiden goddess represents virginity, birth, new beginnings, youthfulness, and growth. The Maiden is shown in the waxing moon; which is the growing phase of the moon as it moves from new to full. The Maiden is the representation of growing change and starting new avenues in life; such as finally pursuing your dream job or growing your family. The maiden can bring about joy, but she can also be fierce, naïve and innocent. The Ancient Greek Goddess Artemis, the virgin goddess of the hunt; is often tied with the Maiden form of the goddess.

Crone: The crone is the wise, mature form of the Goddess who carries a deep understanding of life and death. Her essence can be found in the waning moon when endings occur and lessons are learned. Like death, the Crone form of the Goddess should not be feared. She is there to guide you through the toughest of times; and help you learn from your mistakes so you can put an end to things and move on. The Ancient Greek Goddess Hecate is frequently tied to the Crone; she is the goddess of herbology, magic and ghosts.

While the Goddess may seem more frequently discussed in many groups, the God is an equally important figure in Wicca. He may be referred to as the Horned God, the Sun God; or he may take dual titles of the Oak King and the Holly King.

The Horned God is the consort or husband of the Goddess, usually portrayed in the form of a wild man with horns or antlers and sometimes the head of a beast. He is the ruler of the wilderness and the symbol of virility, hunting and wild animals. His horns or antlers have nothing to do with the Christian figure of Satan; instead, they are actually symbols of his masculinity, sexuality and association with wild nature. In some Wiccan beliefs he is also aligned with death (in opposition to the Goddess, who is life). This doesn’t mean he’s evil, because death is not evil. He is frequently represented by the Celtic god Cernunnos, an antlered deity of animals, wealth, fertility and the afterlife.

When speaking of the God as the Sun God; it’s usually in reference to the cycle of the seasons and the Wheel of the Year. The Sun God is born from the Mother Goddess during winter (still too young but growing as the days get longer). During the springtime, he has matured into a young man who has begun courting with the Maiden Goddess; symbolizing the growth and fertility that comes with spring and the onset of new life.

When summertime, the Goddess; and the Sun God are wed and the God begins to mature to his peak strength when the days are at their longest. During the fall, the Sun God begins to grow tired and the days grow shorter. In the meantime, the Goddess is pregnant with the Sun God and ready to give birth during the winter; continuing the cycle all over again. Each stage in the seasons is indicated by sabbats and esbats that Wiccans may celebrate to honor the earth’s changes and the cycle of the Sun God and Moon Goddess (more on this in Chapter Three).

Like the Sun God, the Oak King and Holly King titles are tied in with the changes of the seasons. In some Wiccan lore, there is a story about two brothers, the Oak King and the Holly King, who battle with one another. The Holly King takes hold of the throne in the winter and the Oak King reclaims his rule in the summer, with their battles taking place at Midwinter and Midsummer. The cycle continues eternally as the two bring balance to one another, a symbol of how the seasons cycle across the earth in a continuous process of birth, death and rebirth.

Note: There can be hundreds of different forms and interpretations of both the Goddess and God; the variations discussed here are only some of the primary titles.